January 29, 2009
To follow up on my post from a while ago, Galbraith sited 5 key reasons for the 1929 crash and following depression:
1. The bad distribution of income.
2. The bad corporate structure.
3. The bad banking structure.
4. The dubious state of the foreign balance.
5. The poor state of economic intelligence. 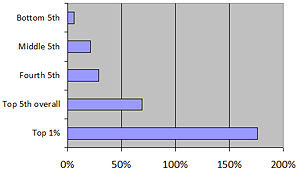 Here is a picture of the real income gains between 1979 and 2005 by percentage. It is clear that the top income groups are gaining ground faster than lower income groups - creating an income distribution that approaches 1929.

2. Bad corporate structure. In the 1929 era there had been a large rise in a "vast structure of holding companies and investment trusts... In particular the dividends from the operating companies paid the interest on the bonds of the upstream holding companies... the temptation to curtail investment was obviously strong." In addition this structure was practically non-regulated.

In today's market, the hedge funds have obviously created a system that rivals the structure of the holding companies and investment trusts of the 1920's. Hedge Funds manage roughly $2.5 Trillion of assets and according to a 2007 WSJ article accounted for about 60% of bond trades. And obviously there is very limited regulation and visibility - witness Madoff...

3. Bad Banking Structure. Galbraith writes "Loans that would have looked perfectly good were made foolish by the collapse of the borrower's prices or markets for their goods or the value of the collateral he had posted. The most responsible bankers were often made to look the worst. A depression such as that of 1929-32, were it to begin as this is written, would be damaging to many currently impeccable banking reputations."

Of course the similarities to today are striking. Looking at the November housing data, prices fell over 18% from the previous year. And of course housing makes up the largest percentage of wealth in the US.

The CDO's have a way of amplifying this. In my mind the CDO's are the increased leverage similar to the high margin leverage in the stock market of the 1920's. Meaning that if the margin or CDO leverage had not been there, the crisis would have been far less severe.

The good news is that the Fed, FDIC and SEC make a very big difference between today and the 1920's. They provide a level of coordination, control and confidence that was non-existent 80 years ago.

4. The Foreign Balance. Of course this is several orders of magnitude different (and from Galbraith's perspective) worse than the 1920's. The global economy and the meaning of imports and exports and multinational companies just brings a whole new perspective. I am not sure this is a real driving impact to this crisis - meaning it is not making it worse IMHO.

5. The poor state of economic intelligence. Galbraith feels the economists and politicians of the era did not understand what was happening and did not respond appropriately. He discusses how Hoover enacted large tax cuts for business, however there was no corresponding increase in capital spending, investment or hiring. There was also a central focus on balancing the budget. In fact Roosevelt's Democratic Party in 1932 ran on the platform of an "immediate and drastic reduction in government expenditures to accomplish at least a 25% decrease in the cost of government." He adds that the fear of inflation reinforced the demand for a balanced budget.

This is a major difference between then and now. We have very active Fed monetary actions, Treasury bank stabilization actions and coming tax cuts and new spending programs. These actions aren't quite the level of government intervention that WWII brought, but they are much more aggressive than the combined actions of the 1930's.

In summary, the similarities are at the very minimum concerning. It is understandable why Ben Bernanke, a careful student of the Depression Era, has been very aggressive in his moves. It is also the driving factor why there is general consensus in the government that major fiscal stimulus is needed. Let's hope it works...
Economy

John said…
"Bad income distribution." You are coming very close to suggesting the implementation of formal income redistribution and socialism.

I can only assume you have decided that, in order to help save the economy and "pay your fair share", you have written Uncle Sam a check above and beyond your required income tax to help reverse this "bad income distribution" trend. And I also assume you have decided to write some additional, voluntary checks to the state of New Jersey, the Moorestown municipality and you've contributed some of your income to the folks in town who are alittle down on their luck and need help with their mortgages.

Bob said…
I am not sure Galbraith was talking about income redistribution via taxes. IMHO, the people at the top of the income brackets tend to make a ridiculous amount of money. CEO's, baseball players, bankers, etc. It just feels a little out of kilter, and the numbers back that up.

I think this recession will hopefully cause a bit of a reset on some of the excess. And not saying I have not benefited from some of that excess...
March 2, 2009 at 12:51 PM

John said…
Here's my problem with that sentiment. Who defines "ridiculous amount of money"? You say as a subjective argument "it just feels a little out of kilter". That sounds noble, until I ask you to draw the line of who makes "too much" and who doesn't - and what to do about those that cross that line? If raising their taxes because they make too much money in order to pay for government programs (some of which they will never use) isn't income redistribution, what is it? Because this is exactly what the Democrats are going to enact into law.

Even the Democrats as a whole don't agree on what they believe when it comes to who is wealthy and who is not:

So what is it? Is a couple making more than $140,000 a year "wealthy" and needs to pay more of their "fair share"? The House thought differently. Obama and his administration officials have, in the past several months, actually given different answers to this - first the wealthy are those couples making more the 250K, then it was 200K, then Biden said 150K.

These aren't baseball stars, CEOs, hudge fund managers. They are more than likely couples working two jobs with kids and a mortgage to pay.

I say, let the market correct itself (as you say, this recession may do this).

And here's the crux of my fear - this spending orgy that Congress and the President have engaged in will affect all of us with much higher taxes, if not now, then several years from now. If their definition of "wealthy" and who deserves to pay higher taxes is already so nebulous and fluid now, how can they possibly resist lowering the threshold when this trillion dollar "stimulus" debt comes due? We spent about $600B in the 6 years fighting the Iraq war - Obama and the Democrats have managed to propose spending that much and more while in power less than 60 days - and they've now begun raising taxes. It's only a matter of time before they propose European levels of income tax on all of us.
March 3, 2009 at 10:33 AM

Bob said…
I see where you are coming from now. Valid argument. Two counter points.

1. The balance of power to companies and away from workers has been pretty big over the past 30 years. In addition, there has been a shift toward letting large companies get larger and more powerful without limitations. In some ways we are in the current economic situation because Citi and BofA and GS and AIG grew too large. There is clearly a shift under this administration toward more power in the working class. That takes a lot of forms in addition to taxes.

2. There are arguments from a number of economists that government has to expand the money supply to avoid the economy going into a full depression. Clearly if the Fed and the government had let AIG, Merrill, Citi fail and had not done such things like extend unemployment benefits, food assistance and medicaid then and argument could be made that a lot of people could be hurting a lot more than they are now or will be in the future. So while you may have to pay more taxes in a few years, a family that can not find a job today has a safety net...