Book Review - Why the West Rules, For Now - Part 1 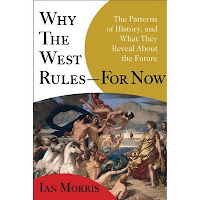 Mike Olson recommended this book a while back on Facebook. It is a dense book, and so full of information (all of history from the beginning of Homo habilis thru today) that I am having trouble keeping up. A passage last night convinced me that I had gotten a couple of big concepts out of it, and figured I would write them down before I forgot them...
The book is written by Ian Morris, who teaches classics, history, and archaeology at Stanford University. It takes an archaeological and social look at the history of mankind and how we developed. Four items stood out to me as learnings from history that could be applied to today.
1. Climate change has been happening for a long time
and has very dramatic consequences. "In two or three centuries 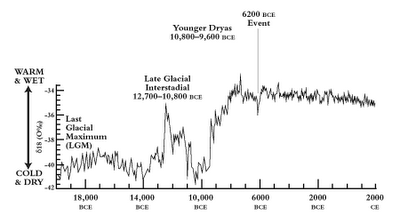 around 17,000 BCE the sea level rose 40 feet as the glaciers that had
blanketed North America, Europe and Asia melted." Weather determined where humans could go (people migrated all the way from Africa thru Asia and Alaska to settle the Americas since they were all connected due to the cold), what areas were warm and wet enough to grow vegetation and livestock, forced migrations as land dried up or became submerged.
2. While he develops a system for rating progress, the most fascinating underlying enabler is how much energy we can produce. In very 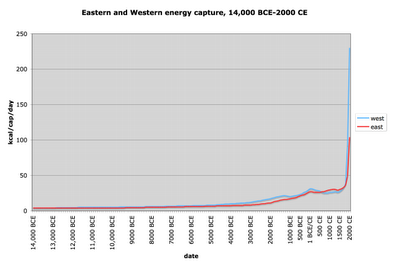 early days we had trouble producing enough calories to feed ourselves with hunting and gathering. Once we started cultivating the land (the "Fertile Crescent" near present day Syria was first around 10,000-9,000 BCE) we started generating more energy in the form of calories people could eat - thus freeing them up to pursue other interests. Once people started forming societies with organization and bureaucracy, they could accomplish great things - like building the Pyramids (that is a lot of calories burned to cut and move all that stone). Learning how to harness the power of water was a step forward. But the real big step was coal and the steam engine harnessed 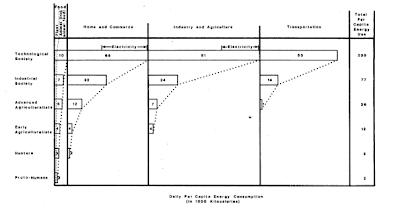 in Britain in the late 1700's. Oil took that to the next level being more efficient and easier to transport, and then the internal combustion engine gave humans access to incredible amounts of energy creation on a per capita basis. And for the trifecta Electricity was harnessed making for three straight centuries of unreal increases in energy creation. There is
a lot more detailed data in a paper he wrote - http://www.ianmorris.org/docs/social-development.pdf
3. It was very interesting to see the evolution of religion as a lever of power across the ages. I must admit it all reinforced my perception that religion has many times been used as a source of power. In the 10,000 - 2,000 BCE timeframe most communities had rulers who was thought to be a God. This was true in both the East and West. Around 2440 BCE the first King "announced that he was his patron god's son." This was a popular angle - having some sort of connection to god. The Han and Roman empires cracked at least partially due to losing the "mandate of heaven". There were only a few hundred Buddhists in 65 CE and by the 6th century most Chinese were believers, and the spread of Christianity in the west was even faster. He calls these second wave Axial religions, offering new kinds of salvation to more people and making the path toward salvation easier." When the high end state institutions started breaking down, the bishops were will placed to step into the gap.

4. Empires Outgrow themselves. During the first half of the 1800's, "British manufacturers were exporting trains, ships, and machines, and British financiers were lending foreigners the money to buy them. Britain was, in effect, building up foreign industries that would challenge its economic dominance.... Britain created such a big market that it would concentrate on those skills that made the biggest profit." He recounts how this basic process has happened many times in the past. "The core" has success and is eventually overtaken by surrounding areas. "It even creates whole new cores when the advantages of backwardness empower those who had previously been marginal. (Social development) growth depends on societies becoming larger, more complicated and harder to manage; the higher it rises, the more threats to itself it creates." I am sure the author will build on this for his theories about what will happen in the future and explain the "For Now" part of his title.
Anyway, a good book if you want to get a broad view of history and human development...