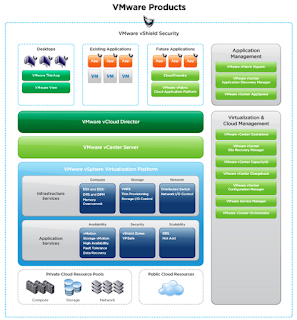 Paul Maritz is trying to figure out how to overcome the innovators dilemma at VMware.  The spectacular success of vSphere and virtualization has taken the company from $700 Million in revenue in 2006 to $3.7 Billion in 2011.  The company now carries a valuation of $40 Billion.

The innovators dilemma phrase, coined by Clayton Christiansen, of course refers to how a company can shift economics, culture, talent, customer contracts, etc. to jump on a new offering.  This is a difficult trick, not often done.  In this case the VMware sales force needs to bring in $4.5 Billion next year, and lowering prices is not the way to get that done as VMware recently proved with their new pricing schemes.  Plus, customers paying large maintenance contracts demand existing technology to get better, not be usurped.

Today VMware is an arms supplier to the Cloud.  This works out well for selling to big companies who think running vSphere and vCloud and vFabric is the same as the cloud.  However, VMware's traditional service provider channel is shunning the VMware technology stack for their public Cloud offerings.

Amazon has led the public cloud market in terms of aggressive offerings and pricing.  This pricing makes it impossible for a VMware service provider such as Verizon/Terremark or Rackspace to base their offering on the VMware stack.  The same is true of the VMware hardware vendors – HP, Dell, IBM – who have been aligned with VMware in the traditional enterprise server business, but are shunning VMware as they bring out their public Cloud offerings.

VMware could potentially bring out their own public Cloud offerings.  But this would compete with their partners, and undercut their existing pricing structure if they were to be competitive in price.  And forget transitioning their business model of ~20% margin with Amazon's 3-4% margin they are used to.

To their credit, VMware has tried to be innovative on the development front with the Spring acquisition and the CloudFoundry PaaS offering.  But even this carries the same set of problems.  Spring may be doing only $100M of revenue, and therefore easy for VMware to justify ignoring.  However, a true PaaS eliminates the need of the whole VMware stack.  Virtualization is done on different levels, with no need for vSphere and vFabric.  (See more on this topic in my article on Application Virtualization).

This is why VMware has been mute on timing and pricing of CloudFoundry.  For every CPU out there, VMware collects about $400 for vSphere and $750 for vFabric (Spring).

That is over $1,100 per year of VMware revenue per cpu.  Given Amazon's pricing of about $750 per year per CPU including the hardware and network and a fair amount of storage, the VMware business model will need to shift dramatically to really play in the new generation of the Cloud.