AnyCloud - The New Generation for Middleware

February 14, 2012
In 1994 a couple of companies all started working on a new architecture for developing and deploying applications on the Web.  I was lucky to be at one of the pioneers of the Application Server market, Bluestone.  It was a compelling vision, especially when Sun stepped up and generated a set of standard around Enterprise Java.  Write your code once and then deploy it to any compatible App Server.  Your operations team would be able to configure many servers to distribute the load and handle massive volumes of traffic.

In 2002 I joined the next generation to move things forward with Professional Open Source at JBoss.  This was great because it put power back in developers hands, and lots more people could afford to develop apps, and those apps and JBoss grew up to be core parts of infrastructure around the world, taking on traditional enterprise vendors like IBM, BEA and Oracle.

In 2010, Sacha Labourey started CloudBees with the vision to bring a Cloud and Service-based architecture to move us into a new generation.  Before today CloudBees was simply the Heroku of Java, with the nice added benefit it looked at the whole lifecycle with the tight integration of Jenkins.

Today in 2012, we have released that new generation - AnyCloud.

Certainly the Cloud offers lots of promise.  Lower roadblocks for developers, lower costs thru shared services, and lots of scalability.  By itself, it puts pressure on traditional enterprise software business models and deployment architectures like vSphere virtualization and Java App Servers like JBoss, WebSphere and WebLogic.

AnyCloud takes it to the logical conclusion with two key steps:

1. Middleware is now a Service - not Enterprise Software.


2. Deployment of applications and load should be completely flexible and open. 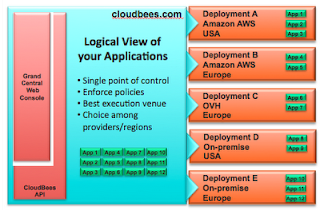 Unlike first generation Cloud companies like Amazon and Heroku, AnyCloud gives you flexibility to run your apps where you want them with all the great Cloud features you know and love.

Unlike second generation app servers like CloudFoundry and OpenShift, AnyCloud is not about selling a new version of their app server with cloud-like features and a traditional channel sales model, or to simply be the Heroku of Java.  AnyCloud is about giving customers the power of deployment flexibility.

AnyCloud offers a new way of thinking about IT Operations.  No longer are you tied down with Enterprise Software that you can only run in-house.  No longer do you have to pay massive IT Operations bills to maintain and grow your own inflexible data center.  No longer do developers have to wait for resources.

AnyCloud, combined with the rich full lifecycle services of the CloudBees Platform brings companies the new architecture.  It is about saying goodbye to old Enterprise Software and hello to a new world of flexible, far lower cost services.

For students of history, and for those who want to see what the future is about - take a look at this white paper that goes into more detail.  Middleware has entered a new age.