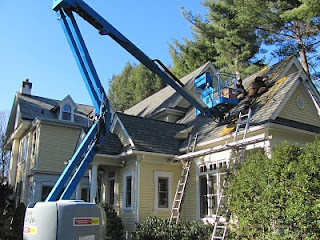 Proven Renewable Energy is the company founded by Harry Mayer, Charlie Close, Chuck Gamble and Dan Fischel to put up Solar energy systems. I happen to be friends with all of them, and was happy to be one of their first customers. From the way the system looks and operates, they will be helping a lot of other people invest in this great technology.

I have solar panels from Andalay. They are a very nice looking system - low profile, all black, and all fit tightly together. Eric and Phil of Close Construction put them up.

We have 33 panels on our back roof. 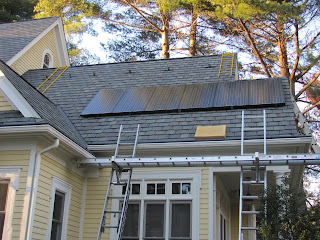 It faces South, South East - so it is a pretty good angle. We do get shade over parts of the roof (you can see that in the crane picture) during the heart of winter. They use a neat little device that gets put on different parts of your roof to estimate the sun exposure over the course of the year. This is used to calculate the efficiency of the system. We also decided to cut down some trees. The system is expected to produce 7,300 kiloWatt-hours (kWh) per year. To give you a sense, this is about 35% of our yearly electric usage.

On the economics side, here are the basics. The system cost a bit over $40,000. There is a federal program that gives a 30% tax credit for qualifying solar systems - so the net up front cost is closer to $28,000. 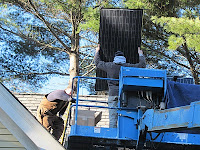 The payback comes in two forms. First, the electricity produced over the course of the year either offsets our current use of electricity, or if we produce more than we use it gets sold back to the electric company. At $0.18 per kWh, that works out to be about $1,400 per year.

The second payback is called an SREC (Solar Renewable Energy Credit). Many states have set programs that require utilities to produce some of their energy from renewable resources. New Jersey has been one of the most aggressive with their Solar Renewable Portfolio Standard (RPS) for utilities, requiring 2% of energy to come from solar by 2021.

The utilities need to deal in bulk. That starts with the measure of an SREC, which is 1,000 kWh. So we will produce about 7 of those each year. The utilities need to buy in units of Millions, not Thousands of kWh. So there are auctions that will aggregate residential units like ours. Right now the price of an SREC is $640. So that means we will be able to sell our 7 units for about $4,500 per year.

SREC prices are likely to come down as more systems get installed, but electric rates are likely to rise. So let's assume they cancel each other out and we get a net savings of about $1,300+$4,500 = $5,800 each year. The net effect is that we break even in about 5 years.

The other economic benefit is the increase in home value. First, the present value of the $5,800 in yearly savings is very valuable (over 15 years at a 10% discount rate it is worth about $48,000). Second, there is probably perceived "green" value on the part of potential buyers of a house with solar energy. 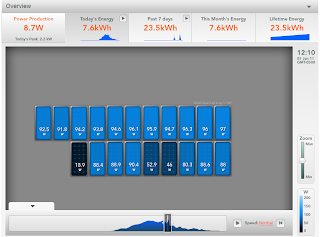 But the really cool thing about this whole system is the online monitoring. Each panel has a microinverter that reports back real time information to a little box that connects to the Internet. Enphase Energy then polls this box every 5 minutes for near real time data that then get displayed in a cool interface (shown in this picture).

It shows a map of the roof and the production of each unit. See the unit on the lower right in the picture is in the shade and therefore not producing as much energy as the other units. The little time graph at the bottom shows total production over the course of the day - it is near nothing at night (it is 6PM and dark right now as I write this and the system is actually producing 20 Watts of energy from ambient lighting). There is a little horizontal scroll bar that let's you play back the day. I'll put up a video of that at some point as it is cool to see cloud shadows and tree shadows make the untis go darker and brighter.

Anyway, I am very happy we did this.

P.S. January 2013 - SREC prices are down to $100-150 range because of all the supply.  There is legislation going thru NJ now to up the amount of alternative energy source requirements for the power companies so it may rise a bit, but not back up to the $600 range which makes the financials a no-brainer.

On a humorous note, I immediately thought of you as Doc in Back to the Future. i.e. the power required is "one point twenty-one jiggawatts". Will you be experimenting in the garage now?!

dfellis said…
We must make sure we have the necessary safeguards in place so we don't harm the environment, while trying to save it. Solar seems the safest as wind needs to come up with a design or method of keeping bats and birds away from the turbines. I know this will all get worked out in the end, we just need to make sure it doesn't get left out.
March 29, 2011 at 12:39 PM