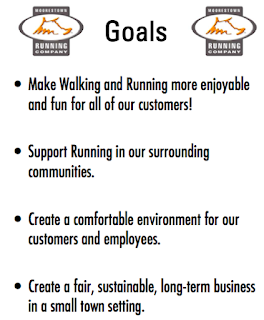 While there were a number of important steps forward in all of the businesses I am involved in, there was one major change worth talking about up front.  I sold my half of the Moorestown Running Company to my partner, Dave Welsh, in November.  As I said earlier, this is a very good thing for Dave, the store, the employees and our customers.  I'm really happy that the store has accomplished all of the goals we set out for it nearly 6 years ago listed on the right.  And Joe, Ralph, Ed, Colleen and Dave will ensure it keeps going strong into the future!

One of the reasons for selling the store was that I was not spending the amount of time and effort on it as I thought I would 6 years ago.  In 2012, a big reason for my distraction was RunSignUp.  We started this Cloud Service up in 2010 and this was a very big year.  The number of races, clubs, race directors, timers and runners using it grew about 3.5X 2011 (of course fast growth is easier when you are small), and it looks like we are going to continue on that path moving into 2013.

The biggest impact of the year at RunSignUp is having Stephen Sigwart back full time after his graduation with his Masters in Comp Sci this past spring.  He is truly brilliant as witnessed by the recent completion of our Scalability and Availability project where he hardened our Cloud Service to handle 50,000 registrations in 7 minutes. The team also includes Andrew Burke, Jordan Desilets, Erik Ramstad, Jeff Keisel, Andrew Sigwart, Eric Hagman, Brian Robinson Sue Lindeboom and Billy Connolly.  Take a look at the number of innovations we have brought to market in 2012 on www.facebook.com/runsignup or runsignup.wordpress.com/. Dozens of really cool things like an Open API, advanced Results, comprehensive participant management, mobile timing app, new easy to use User Interfaces and much more.  We are positioned well to grow and serve our customers - who seem to love what we are doing for them!

Metaverse has gone thru some big changes this year.  Two of the founders, Doug and George, have moved on to new endeavors after nearly 10 years of effort.  The good news is that Tom Novellino, who came to the company several years ago as the CFO and was promoted to the COO is now the CEO.  The team is refocusing on the core e-commerce business and implementing a number of projects that are bringing some good profitability to the company.  The big lesson that I have learned here is that while Google Adwords continues to compress profits (since companies bid against each other until there is no margin), there are a number of business basics that are the keys to running any business - all centered around making customers happy.

eXo is in the process of spinning off the fast growing Cloud-IDE business, and refocusing the rest of the company on the base Platform business.  This will make sure that each business is able to reach the maximum value by focusing on particular markets.  Watch for the news in early 2013.

CloudBees had a marvelous year.  The management team has been together for most of the year and the business is really maturing.  Again, it is small, but seeing growth of nearly 4X was impressive proof that the company is heading in the right direction (complete, Open Java PaaS).

I'll conclude with the observation that the Cloud has become the mainstream.  In November I made a trip to the Amazon Web Services Conference.  Each day Amazon the amount of compute power it used in total as a business in 2003 when it did $5B in sales.  In several years Amazon will be adding more compute power than HP or IBM will ship to all of their enterprise customers. At RunSignUp we were able to use hundreds of servers for tens of dollars to test our scalability.  The advantages are truly incredible and are enabling a whole new generation of applications and exciting new businesses.  I'm lucky to be able to experience this special time!