Launchable announced today that Kohsuke Kawaguchi is a co-founding member along with Harpreet Singh. Why is this important? Well obviously because of two things - Kohsuke and how their company will improve DevOps with a new era of testing. Why is Kohsuke Important? In short, because of a proven background of creating a massively used technology, in an open and inclusive platform and community, and has done so in a humble manner. Kohsuke created Jenkins (then Hudson) while he was a developer at Sun. He saw a chance to have software serve his need of doing continuous integration - automating the cumbersome build-test-deploy cycle. He soon realized it could be used by his colleagues and the rise of Jenkins began. In December, 2019, there were 264,000 locations with 992,000 nodes running Jenkins, running 32,870,000 jobs. Take a look at  t he Jenkins statistics page to see the up and to the right trends that Kohsuke started 15 years ago. So Kohsuke might have gotten lucky by
Post a Comment
Read more

CRM Version 6 – This time for Races

I’ve been lucky to use CRM in various ways over the past 35 years. The RunSignUp implementation is the 6 th major implementation of CRM I’ve been involved with over the years. From the beginning, RunSignUp has implemented many of the key concepts of CRM so that races can maximize customer satisfaction and retention and lower costs of customer support – all with the goal of engaging their various communities to maximize the impact of their race. Right now, we are consolidating our various features of Participant Management, Marketing Automation, and central consolidated database to bring a comprehensive set of CRM benefits to races. It might be interesting to see my personal journey and compare how CRM has matured over the years. 1.      1987 - Digital Equipment Sales Tracking. I did a side project to help the District Sales Manager and her 50+ sales people do a better job of tracking their prospects and sales. This was back in the days of Act!, which was built on PC’s,
Post a Comment
Read more

Sometimes a combination of market forces, technology changes and people coalesce into a rare opportunity. That is happening for CloudBees now. DevOps has been hot for the past few years, but the recent GitHub acquisition by Microsoft put an exclamation point on it that reverberated in the industry and beyond. In 1913, Henry Ford put together the idea of the assembly line to produce cars faster with higher quality. Today, almost every business and organization on the planet is based on software at some level - to track orders, to win new customers, and even to replace old business models. And the key competitive advantage is creating better software, faster. Several years ago, the idea of DevOps emerged - basically cutting the overhead and shrinking the time to market. Companies like GitHub were created to allow developers to share code and make changes faster. A clever guy at Sun, Kohsuke Kawaguchi, saw a personal and organizational problem way before the DevOps revolut
Post a Comment
Read more 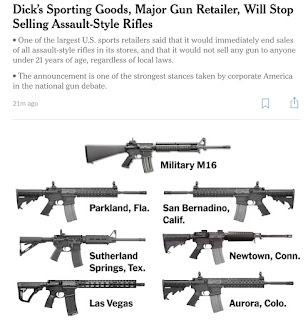 I'm a glass half full type of guy. And lately I have been feeling better and better about the US because I see all these good, common sense things happening like #metoo. I woke up this morning feeling so much better because of the simple step taken by Dicks Sporting Goods. “When we saw what happened in Parkland, we were so disturbed and upset,” Mr. Stack (Dicks CEO) said in an interview Tuesday evening. “We love these kids and their rallying cry, ‘enough is enough.’ It got to us.”
Post a Comment
Read more 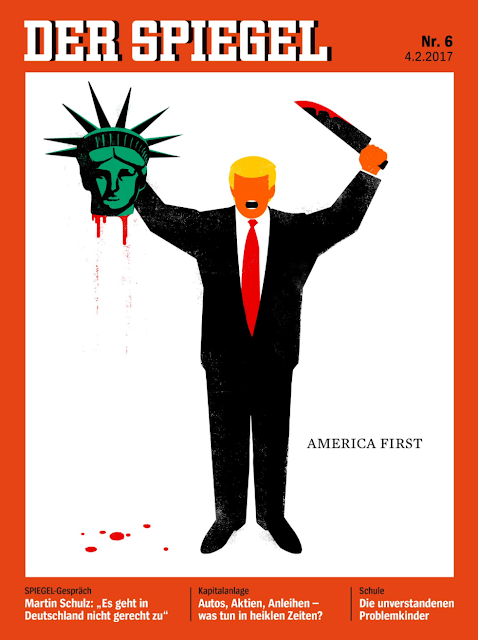 From: http://magazin.spiegel.de/SP/2017/6/index.html The rest of the world has a new image of America. I'm not sure this is the real way to put America first...
Post a Comment
Read more

I've been bothered by this "America First" slogan. Part of this is the fact I work with a very diverse set of people . I watched the new " Becoming Warren Buffet " movie on HBO this week. And one of the things he said really crystallized my problem with the "America First" slogan. To paraphrase he said: "I won the lottery. There was a 1 in 40 chance that I was born in the US. And there was a 50-50 chance that I would be born male. So I have a hard time understanding why my life is worth more than anyone else on earth."
1 comment
Read more
More posts