Showing posts from June, 2011
Show all

Tonight I read about Oracle's lawsuit against Google and then HP's suit against Oracle. I got depressed and did a couple of sarcastic Tweets. Then I opened up the NYTimes and read IBM's essay celebrating their 100 years . While it takes a couple of cheap shots at founder-driven companies (Apple, Oracle and Facebook envy), it is a very aspirational piece. My favorite quote is: "I believe that if an organization is to meet the challenges of a changing world, it must be prepared to change everything about itself, except its beliefs." - Thomas Watson, Jr. I admit, I am a sucker for IBM. My Dad worked there from the mid 1960's until his retirement. I had a summer job in the Glendale Labs where I wrote 11 lines of code that went into all of the company's 300 and 600 lpm band printers in the late 70's. I attended a day long class in the history and culture of IBM, learning the importance of THINK , of respect, and the value of technology. Tom Watso
Post a Comment
Read more 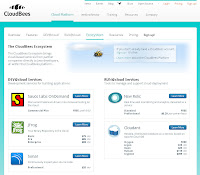 CloudBees took another important step forward in fulfilling our vision as the Java PaaS innovation leader with the announcement of the CloudBees Partner Ecosystem . CloudBees knows that we can not develop everything ourselves – and that customers want choice and flexibility. Here are the first partners, with more coming soon: JFrog Artifactory - Binary Repository - think Super Maven! SonarSource - the leading open source Static Code Analysis. Sauce Labs / Selenium - the leading open source based cross-browser testing service. Cloudant - Clustered, cloud-based CoachDB (noSQL) service. New Relic - the leading Cloud Monitoring service. The Cloud offers new ways of partnering and bringing solutions to customers, and CloudBees is enabling that in an open, flexible, easy-to-use offering. For Java Developers and IT shops: • Extends the low cost of doing business on the Cloud. • Enabling extended services is as simple as clicking a button. • Integration is already done in the Cloud
Post a Comment
Read more

CloudBees is in an interesting position being so far ahead of the rest of the competitors in the Java PaaS space. We have a GA offering that is basically competing with Beta versions from VMWare ( Cloud Foundry ) and Red Hat ( OpenShift ). So we have to price our full offering ahead of our competitors. We all have free versions. Given the market is early, this might be the most important thing today given that a lot of people want to experiment and learn and understand how the Cloud can play in their development and deployment cycles. It is likely we will all keep free versions. For example, CloudBees offers up to 300 free minutes of Jenkins build time per month on the dev side ( lots more for Open Source Projects ) and up to 5 apps on the RUN@cloud side. Of course those 5 free apps are not scalable, or have high availability or have SSL or have custom URL's. But certainly very useful for learning, testing and even small apps that are non-critical. The interesting part co
Post a Comment
Read more
More posts