How Steve Jobs Impacted me 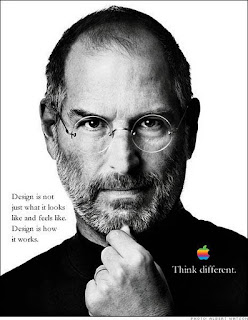 While many people are saddened by the loss of Steve Jobs, it goes just a bit deeper for me


In 1992 I was at a small consulting company that resold software, Bluestone Consulting.  Mel Baiada was the owner and founder, and was famous for dropping lots of articles on my desk that were interesting.  One day he dropped a video tape of Steve Jobs demoing Next.  It was an over-reaching workstation/operating system/development environment.  But it had the by now familiar Steve Jobs elegant simplicity.

The part that fascinated me was a demo of him dragging and dropping a database object like last_name onto a graphical object like a text field for the last name.  Of course Jobs made the demo cool by dragging and dropping graphical objects like a person's picture onto the screen.  Then pushing a button and magically it was an application.  Users of the application could type in a last name and do a search of the database and poof – that person's information would be there, including their photo.

At the time we were reselling a product called UIM/X which allowed developers to create the user interface for an application, much like half of what Next did.  We had also started reselling a product called dbViewer, which provided a quick way to retrieve information from a database.  "Borrowing" from the Steve Jobs video, I decided we needed to create our own product to do the same thing.  Mark Nigro and Scott Pennell joined the company and created the first version of this product.

Shortly after the World Wide Web started (1994-95), we created a totally new version of this product called Sapphire/Web – a visual tool that created one of the first application servers in the market.  That product grew and Bluestone Software eventually spun out of Bluestone Consulting, provided hundreds of jobs and opportunities for people.  Many of those people have gone on to create many more products and services that have created many, many more jobs and created lots of market value.

That whole chain of good things happened because of Steve Jobs.  All of my personal career good fortune goes back to that video.  I am convinced I would not have had the career success I've had without Steve Jobs.

Francois Dechery said…
It's fascinating to see you go back to the roots of your journey... What made this journey successful was also your ability to understand in that demo something that many others missed, and then take action. Steve showed you the way and that's already a lot, agreed.
October 7, 2011 at 3:16 AM

Roger Bly said…
Wow! It is amazing how the influence chain works and how a person can impact so many others down the chain. Your blog post got me thinking..

Like Bob, the loss of Steve Jobs goes deep for me. Around 1979 when I touched an Apple II in high school, I knew what I wanted to do. Then I used BSD Unix, email, and early Internet (ARPAnet) at UCSD in 1982, I knew again.

At UCSD I began hanging out with the “UCSD Pascal Project” people and saw the “Apple Pascal” port for Apple II, Apple III [and secretly being used for early Mac development we later learned]. I fell in love with the concept of pseudo code and virtual machines. I worked in Ken Bowles’ teaching lab to get more time on new IBM PCs running the UCSD p-system OS. James Gosling later said the UCSD p-system was a key influence on his design of the Java virtual machine.

I became part of Bob’s chain in 1997 after looking fruitlessly for a “Java server-side application container” to build web apps. I remember working on my little collaborative web app experiment during winter vacation in December 1997 and being pissed that I had to code things like database connection pooling. Then I noticed the Bluestone press release that had come out after my search.

I brought Bluestone Sapphire/Web into Rockwell Semiconductor’s advanced technology group and into the separate personal experiment that later became startup Project.net, Inc in 1999. Project.net brought it all together for me: Java, Unix, Internet, and beautiful mobile devices like MacBook, iPhone, and iPad.

Thanks Steve and Thanks Bob.