I just read Matt Asay's article - Unstoppable JBoss 'mafia' has big tech biz in its crosshairs.  It really got me thinking about the old days and all the great people at JBoss.  I have no idea if my motivation (and available time) will enable me to finish, but I thought I would share my recollections and some of the stories I saw unfold at JBoss.  While I actually never really did anything at JBoss, I was in a position to see a lot of things happen across all aspects of the company.  Hopefully I won't mis-represent anything, and encourage others to correct me, or add to the story lines, or create their own recollections.  It was an interesting ride...

Meeting JBoss
My first interaction with JBoss was shortly after Bluestone had been acquired by HP.  We had become interested in the idea of open source for our app server, but were precluded from it by our licenses with Sun for J2EE.  Rich Friedman was then the CTO for us and he tried to make contact with JBoss to see if there was something we could do together.  JBoss was (smartly) not interested at the time.  I forget exactly, but the rejection from Marc Fleury had the typical spice to it, and I remember laughing with Rich about it. 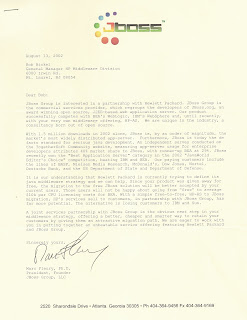 In 2002, HP had acquired Compaq and we were shutting down the Bluestone/Middleware division.  Marc sent a letter to myself and Carly in August, 2002 (see a copy on the side).  I called him back and told him I doubted if Carly would respond since she had decided to pay BEA $5M to transfer the Bluestone customers to WebLogic, but that I was going to be free shortly.

I went to New York City in September, 2002 and met with Marc and Ben Sabrin for the first time.  Marc was giving a training class in a hotel there.  And I got to hear the amazing story for the first time.  Some of the items below I probably learned later, but I will lump them in together here to make this series somewhat chronological.  Some of this is probably wrong, but it is my recollection of the stories.

The Start of JBoss
Marc worked at Sun as an evangelist and got tied into the J2EE efforts.  He got to know Vlada Matina and Mark Hapner, two of the key architects behind enterprise Java and EJB.  Marc become very interested and started up an open source project called EJB-OSS.  It got some early traction and some others started joining as contributors to the project.

His first attempt to make a living out of it was an attempt to create a company that would basically put up a J2EE Platform as a Service.  Of course that was before the Cloud was cool, and the VC's did not invest.  Marc loved to tell the story of how Doug Leone of Sequoia said "This is not a bad business plan, this is a HORRRRRRIBLE business plan."

When the money ran out, he and Natalie moved from California back in with her parents in Atlanta.  Marc worked in the garage, literally.  Another great line we used to say was "Marc didn't start this business in his garage - he started it in his In-Laws garage."

Training!
A few users were asking for help and training.  He decided to see if anyone would be interested in a training course.  He posted it and filled a class of 20 for $3,000 each.  He and Natalie did a few of these - taking trips to places like Australia, renting a hotel conference room and collecting $60K for a week's work.  All of a sudden, he was in business!

It also turned out that a number of the contributors to to the project also wanted to get some side work in - so Marc started farming out some of the training.  Juha Lindfors picked up on this and eventually led the training efforts - creating better and better material and delivering a number of the courses.  This also led to more dedicated open source contributors, which of course had some great effects on the project becoming better and better.

Scott Stark & Documentation
One of the best things to ever happen to the project was a contributor named Scott Stark.  He was a Bear Stearns developer, specializing in security I think.  One of his most important early contributions was to write some documentation.  I forget the early arrangement, but I think he got a % of all the documentation sales.  Documentation was an important early revenue driver.  My memory is fuzzy, but I think we were doing about $20,000 per month in documentation sales by the 2003 timeframe.  More importantly he became the real rock of the development team - putting together all the builds and making sure JBoss was a quality project.

"Doesn't Suck"
Ben Sabrin had a unique blend of talent as a recruiter in Atlanta.  He has the sales person's natural talent to talk with anyone about anything.  But more uniquely, he could talk with developers and really understand what they were saying.  He also had a nose for new trends, and he was seeing the rise of J2EE and this little upstart JBoss.  Probably in the 2001 timeframe, before he joined JBoss, he organized a session for developers where each of the J2EE vendors would speak.  IBM and BEA reps stood up and gave their normal boring presentations.  Marc arrived late without a laptop and saw others were giving presentations.  He borrowed someone's laptop and put together his two slides.  First slide: "JBoss is Free" - great applause.  Second Slide: "It Doesn't Suck" - brought down the house.

Well, my first meeting with Marc and Ben was a lot of fun.  They were clearly riding a huge and growing open source project just at the right time.  It was clear Marc was super smart and had such wonderful charisma and drive.  After the devastation of my time at HP, this was so refreshing and fun.  We planned to talk more and see if I could help them as a part time advisor.  That meeting happens in October, 2002 and I'll pick that up in Part 2.