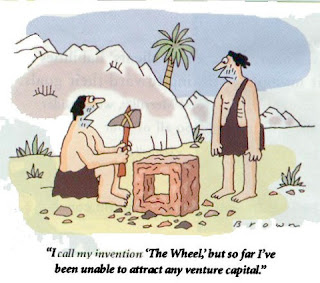 Why I was a Fan of VC Funding
Here is an example story. In 1994 Bluestone had created a tool that made it easy to develop applications for the web that were driven from a database.  Today this is how all websites work, but it was the early days.  We were funding the development ourselves out of cash flow, and investors approached us - Bessemer actually gave us a term sheet. The founder declined.  Our competitors (Spider Technology, which became NetDynamics) got funding and we were forced to respond to match their higher levels of spending and go look for venture funds.  Of course when we did, our final term sheet with Patricof and Adams was lower than the original one from Bessemer 18 months before (and we had lost a year and a half of time).

I became a pretty big cheerleader for getting venture capital. In addition to being able to be more aggressive in development, marketing and sales, it also brought a discipline with outside board members that was healthy to challenge and motivate and bring structure to the business.  When I joined JBoss, Marc decided to take venture investment.  It is safe to say that David Skok of Matrix added a lot to the company, in addition to giving us the capital to move forward aggressively in the market.  Similar positive experiences happened at Hyperic and Spring. Currently I work with several companies including CloudBees and eXo who are venture funded (appropriately because they are going after big problems in big markets). And from a personal basis, I have enjoyed making most of my money from capital gains of appreciated stock.

Why I now like "Lifestyle" Businesses
When talking with VC's, they will kind of look down their noses and ask founders if they are interested in a "lifestyle" business.  It is almost presented as a choice between being lazy or taking funding.

I think the world has changed quite a bit, though. The cost of creating a product and bringing it to market are drastically lower in the technology space. The Cloud allows people to develop a service that can be used by Billions of people instantly.  If it does not catch on the cost is minimal, if it does catch on it is very low cost to expand.  The cost of marketing and sales has also dropped tremendously - there are fewer and fewer "enterprise sales reps", and the best marketing is viral and true word of mouth.

In essence, it is cheap to start web based businesses today. And funding will not improve the chances of your idea being good or not.

I am going the "lifestyle" way on my two latest startups - RunSignUp and RedLine13. The first started in 2010 and we have grown on a grass roots basis.  We develop features in an incremental fashion. As we add features and capabilities, we are able to address more and larger races needs. It is a self-fulfilling realization of success. Our desire is to create a great service for our running community and build a solid, profitable business. This is not saying that Eventbrite is bad for taking $140M of capital and building a very large business - just that this alternative is a very good one for a lot of entrepreneurs.

In the case of RedLine, we just launched this service as a part time effort.  It costs us about $3,000 per year to operate it as a free service.  We are seeing encouraging signs of early adopters coming to us.  Perhaps we could go get venture funding for it, but then we would be like all the big competitors and wind up with similar pricing. If we stay small, then we can have a nice little profitable business that helps customers.

With both of these companies, I get that dismissive, "oh, a lifestyle company, isn't that cute" kind of feeling when talking about them with my friends in the industry. In reality, I have a lot of fun with both businesses and will make a lot of money with both.

My Recommendation
I was on the phone with an entrepreneur yesterday who was looking for $500K. I told him if he went to professional investors they would basically string him along until he was producing cash, at which time he would not need their money. In his case, he is better off taking his time with development and not hire another developer right now. Build the product his first 3 customers want and then move to the next set of features from the next set of prospects. In a couple of years he would have a profitable business that would either produce a nice flow of income or be very attractive to acquirers. And he would not have wasted 6 months of his time chasing funding rather than figuring out creative ways to build the business.

While it makes a lot of sense for some businesses to seek funding, there are a growing number of opportunities that you can grow with very small capital needs. The goal is building a business, not getting funded. Even if people think it is a lifestyle.

Wikipedia defines: " Capitalism  is an  economic system  in which trade, industry and the  means of production  are controlled by private owners with the goal of making  profits  in a  market economy ." This definition has always bothered me. I prefer a different model where there is equal recognition of the three primary drivers behind the success of a company: Owners Employees Customers I like to think of it as a three legged stool, where each leg is as important as the other.  One gets too large or small and the stool tips over. The free market is supposed to take care of Employees and Customers.  Employees because the Owners will create so many jobs that due to supply and demand, employees will receive competitive pay.  Customers because if the owners are not building the right thing, then they can go elsewhere. As someone who has helped to build about 10 startup companies now, I have seen the power in making these three stakeholders equal partners.
Read more