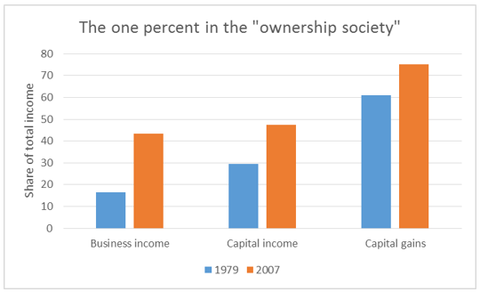 "...the political spectrum now instinctively accords much more respect to capital than to labor, at a time when capital income is growing ever more concentrated in a few hands — and is surely on its way to being concentrated largely in the hands of people who inherited their wealth."


This is somewhat related to my earlier post of how I wish things were - with a balance between owners, employees and customers - called Capitalism and the Three Legged Stool.

These topics have been beaten to death, but I wanted to expand on my own experience of how this plays out in helping to determine the probability of financial success.  I want to point out two examples of how the tax system is set up in a way to help people with wealth.

Capital Gains as a Tax Break for the Wealthy.
This is the primary issue that Warren Buffet is referring to when he talks about income inequality.

I am lucky to have been a small part of several companies that either went public or were sold. The primary way I have made money over the past 15 years is via capital gains, which were taxed at either 20 or 15% rather than the marginal tax rate of 35-39%.

In two ways, that seems fair. I chose to be paid in stock rather than income, therefore taking the risk these companies would not become valuable.  Second, I was part of teams that created something out of nothing and created jobs, which is what the American Dream is all about.

However, it bothers me that people that chose to work at these companies did not have a similar choice.  First, because only the top people are offered this type of incentive. But also because they did not have enough money to forgo a salary.

Also, most of the venture money came from either wealthy individuals or from non-profit funds like private and public pension plans and University endowments.  Obviously the non-profits would have invested no matter the tax rate. And the wealthy individuals were looking for those big 10X returns as the reason they funded these companies, so tax rate was a relatively minor part of their investment thesis.

My point is that this capital would have been available to fund these companies even with a higher or non-existent capital gains rate.

Capital Gains Treatment Does Not Encourage Building Businesses for the Long Term
Although the Capital Gains tax is designed to encourage long term investing, there are a number of ways it does not.  This is seen today in venture capital backed companies.  The VC backed companies are mostly designed to grow fast and be attractive to a buyer so that the principles can cash out with low tax rates.

Let's take it from my view as the founder of RunSignUp.  Unlike my other companies, this one is not venture backed, and was funded solely by me (another advantage of having money).  We have grown fast and are now a profitable company.  Since I own it, that profit is now taxed at the marginal tax rate of 39.6%.  For me, that is fine and I am happy to pay that given the fact that the company would not exist without the wonderful infrastructure, people and wealth of our amazing nation.  I also happen to really enjoy the work we are doing and want to continue for hopefully a couple of decades.

But we have already been approached about being acquired.  Think about the advantage of the 20% Capital Gain rate.  Greatly simplified, it would allow me to keep an extra $20 out of every $100 of value of the company to sell it.  And if I were the type of person to maximize my profit, I would try to grow the business unnaturally for today and leave future investments until someone else had to worry about it to maximize the sale price.

That does not sound like the basic idea of building long term businesses via a capitalistic system to me.  It sounds like a system that maximizes the wealth of the wealthy.

To bring this back to the topic of Patrimonial Capitalism, the wealthy who are looking after the interests of the country have seriously stacked the deck in their own favor.  I see this personally, and like Warren Buffet, it bothers me.  And I just wanted to get that out of my system...

Kelly S. said…
I enjoyed reading your article Bob. I'm encouraged by the fact that you have enjoyed success and still have a heart for the average everyday citizens, who are striving to obtain the American Dream. Kudos to you.
June 2, 2014 at 8:02 PM

needmoreO2 said…
Bob, I'm sure Bryan shared what happened when we sold the business. I believe it is up to the investors to spread the wealth. Our tax system isn't perfect and the rich can wait a year for money (long term cap gains) while the common person can't wait a year or longer as you mentioned.

Beyond employees, I believe the bigger impact from my past business was with the customers and participants. The average customer saved or made thousands of dollars annually by switching. Not only was the savings in a direct monetary form but also indirectly via time saving/human capital cost savings. This all helped save millions of participants money but more importantly helped society as millions of people lived healthier lives. This in turned saved all of us money by reducing health care costs. I thank you, Bryan, and others to continue that battle!

My new venture may not have as big of reach (internationally) but I hope in time to have a similar impact. First, make money. Second, share it with employees. Third, give away thousands if not millions. In return, I will likely be rich in pocket but more importantly in my soul.
May 30, 2015 at 5:29 PM