March 24, 2008
We have a bit of March Madness at Ringside getting ready to launch tomorrow. But for the rest of the country, it is the NCAA college basketball tournament - and of course CBS Sports big deal with Facebook.

CBS has provided this year's bracket system on Facebook (a Facebook application). Hundreds of thousands of Facebook users (including my 11th grade daughter) have made their choices and anxiously compare themselves to the rest of their friends, or within their high school or across the world. CBS is going to make $25 Million this year from on-line advertising of the tournament, and the Facebook crowd is a big channel for them. It also engenders the type of engagement and virality we have been talking about in this blog.

By the way, I love the "Boss button" on the webcast site - it brings up the following image very quickly... 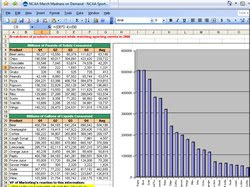