April 21, 2008
We are announcing the first two sites to go live with the Ringside Social Application Server on Tuesday morning. Both of these websites had Facebook envy, as much of the world does these days. They took the approach that if you can't beat them, join them! Both websites have deployed applications that run on Facebook and on other websites. They also both take advantage of Ringside's Identity Mapping technology to let users link their accounts to Facebook. 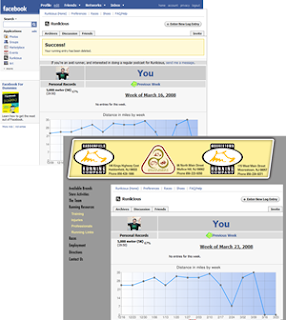 The first is an example of a Facebook application that wanted to go beyond Facebook. Jonathan Otto wrote a very cool application for runners, swimmers and bikers called Voomaxer. You can access it at http://apps.facebook.com/voomaxer/. Local specialty running stores wanted to give this type of functionality to their customers – to tie them closer to their stores. Jonathan wanted a revenue model beyond selling ads on Facebook. Ringside gave them both what they wanted.

With Ringside, Jonathan was able to take his Facebook application and deploy it on any website. This allows any specialty running store to simply add the application to their existing website. Since it also integrates with Facebook, runners with a Facebook account can update or view their information on either the running store website or on Facebook. And they are able to connect with friends in either environment. You can read more about this deployment at http://www.ringsidenetworks.com/socialbusiness/.

What is Art?
The second example is an e-commerce site, www.fulcrumgallery.com. They were looking for a way to extend beyond search marketing and into social networking. They believe that social applications will engage their current customers more, and that a Facebook application is a free way to tap into the huge Facebook user base. They built a social application that gives art lovers a way to comment on art. And they made it social by creating a voting system for the comments. 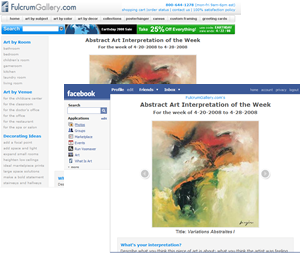 The What is Art application can be found on Facebook at http://apps.facebook.com/what_is_art/. The same exact application is available on the fulcrum gallery website at http://www.fulcrumgallery.com/ArtInterpretation.aspx#.
You can read more about this deployment at http://www.ringsidenetworks.com/socialbusiness/.